In the period from 2002 through 2010 Udeco designed and developed equipment and methodologies for deployment and installation of Hydraulic, Electric and Optical Flying Leads, including HFL’s with Inconel tubing. 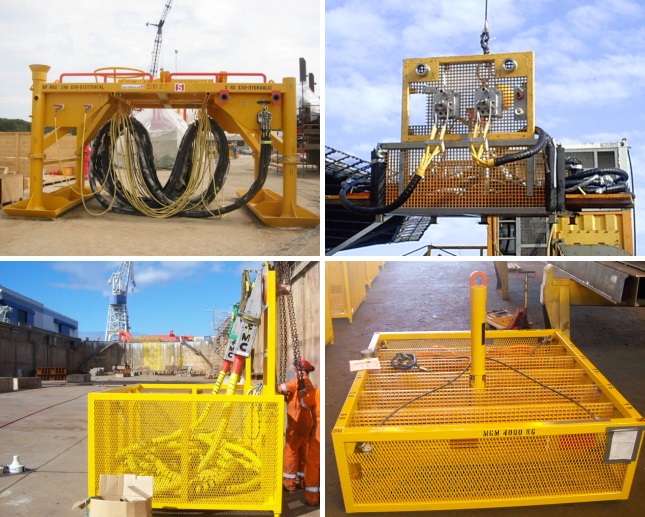 In the period from 2002 through 2010 Udeco designed and developed equipment and methodologies for deploymentand installation of Hydraulic, Electric and Optical Flying Leads, including HFL’s with Inconel tubing.

On the Stine project in 2002-2004 Udeco also designed the flying lead installation system that was used from the jack-up drilling rig that competed the subsea installations on the field. Among other equipment, one of the Udeco Ubas A ROV rental baskets were reconfigured for a combined HFL and EFL deployment and installation operation.

In 2007, Udeco developed a low cost and operationally efficient Electrical and Optical Flying Lead installation system. This was the Ubas E ROV basket with multiple flying lead compartments and stacking features. Eight off these stackable ROV baskets were fabricated and delivered to FMC Houston /Chevron for the Abgami subsea field development project (West of Africa).

In 2010, Acergy Houston also purchased one off the Ubas E multi-compartment basket, and six off stackable Hydraulic Flying Lead installation baskets, Ubas F, for the Megi Project (West of Africa). These latter baskets included MQC parking stands that were fast to erect / lay down (i.e. due to basket stacking). The scope of work also included full scale EFL and HFL pull out tests.

Udeco has adopted the Ubas rental baskets to include the same features as included in the Ubas E & F purchase baskets. Hence, low cost Ubas ROV rental basket configured for EFL, OFL and HFL installation (single or multiple) are available for hire, and have been used for this purpose on a number of occasions by Technip, Ocean Installer, Subsea 7 and other.